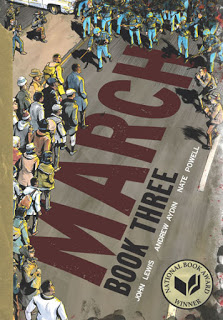 This unforgettable final volume in Congressman John Lewis’s multi-part memoir about the Civil Rights movement in the 1950s and ‘60s has rightfully won numerous major book awards. Book Three maintains the graphic novel format of the first two parts, moving back and forth in time between when Lewis was a leading member of the Student Nonviolent Coordinating Committee, and the day of President Barack Obama’s first inauguration in 2009.

Nate Powell’s powerful illustrations, which brought to life lunch counter sit-ins and the March on Washington in the earlier books, cover the period between the 1963 bombing of the 16th Street Baptist Church in Birmingham, Alabama, to the signing of 1965 Voting Rights Act in this volume. Although legendary figures like Dr. Martin Luther King Jr. and Malcolm X appear, March is ultimately the story of daily heroism by everyday people. Many marchers endured beatings, arrests, and even the murder of friends, but they kept protesting until they ultimately prevailed in their quest for the vote. The whole trilogy is a sobering, but important, read for teens and adults.