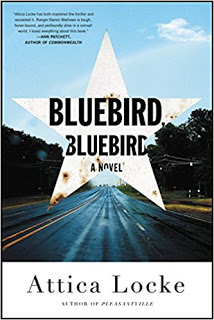 Darren Mathews grew up in rural East Texas on land his family had owned for generations.  He became a Texas Ranger like his uncle.  When the book begins, he is a little down on his luck.  He and his wife are spending some time apart, and he has been suspended at work.  An old friend asks him to investigate a double murder in the tiny town of Lark, Texas that may be racially motivated.  The body of a black lawyer from Chicago was pulled from the bayou.  A few days later a younger white woman’s body was found.  Darren goes to Lark and finds a mystery with many layers.  He is able to have his suspension lifted and makes certain the local police look at the deaths from every angle.  The characters in this novel are varying mixtures of rich, poor, black, and white.  They are an interesting group.  The mystery is eventually solved, but the book ends rather abruptly and leaves a whole new issue between Darren and his mother.  Hopefully this is the beginning of a new series.