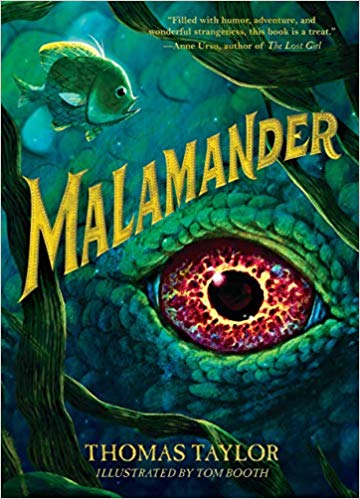 Recommended for ages 8 to 12 years.

The coast of Erie-On-Sea is said to be home to a supernatural creature seen only on a winter night. Herbert Lemon, resident Lost-and-Founder for the Grand Nautilus Hotel, has heard the legend, but who really believes such things? A girl named Violet comes scrambling through his window one evening begging to be hidden, but she also wishes to hire him to help her find her parents (he is after all the resident Lost-and-Founder at the hotel where she was abandoned as an infant). Unfortunately Boat-Hook-Man is also on her trail and will go to any length to find her as she and Herbie try to piece together what happened long ago when her parents disappeared, leaving only their shoes and her behind. But what could a man with a boat hook for a hand want with a 12-year-old abandoned girl? And why is the resident author of the town so interested in what she knows about her father when she’s never met him, nor even heard of the town legend, the Malamander? Luckily Violet and Herbie are determined to find the answers to her past, despite the rumors that the creature has been seen in the very place her parents disappeared.

This was a lovely adventurous tale which should definitely become very popular, especially since Sony has won the movie rights in an eight way bidding war for this story!