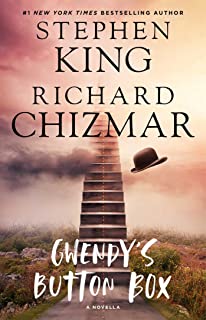 More and more often lately, a little voice inside her head is asking questions she doesn’t have answers for. Why you, Gwendy Peterson? Out of all the people in this round world, why did he choose you?

It is the summer of 1974, and 12-year old Gwendy Peterson is doing her daily climb of the Suicide Stairs in Castle Rock when the man with the black hat she has seen sitting on the bench below all week speaks to her.  Smartly, Gwendy points out that she doesn’t speak to strangers, but after the eccentric man dismisses her claim with a brief introduction, she starts to feel at ease only because human nature decides that curiosity wins the battle.   The man, Mr. Richard Farris, proffers a box to Gwendy that has buttons which are ‘very hard to press’ and ‘little levers’ that grip her attention most.  The lack of information given by Mr. Farris about what exactly the buttons can do if pressed is unsettling.  At first, the box is received with great apprehension by Gwendy, as anyone would feel upon receiving something so bizarre; but as time goes on and her fortune in life increases markedly, her concerns shift from self-esteem anxieties to power struggles with the box having control of her life.  The balance of consequences she faces from reaping benefits from the box over time start to take their toll…..

Gwendy Peterson.  Initially, she is remarkably average, struggling with adolescent ‘chubbiness’ and facing societal pressures to be viewed in a particular way; striving for balance in her self-esteem and persona.  On the contrary, it is revealed that Gwendy is quite extraordinary.   As I was getting to know Gwendy’s character, I was impressed with her strength to exercise discretion of the power given to her through possession of the box, and the fact that she kept her lips buttoned about her secret (pun intended).  It almost seems that it is part of human nature to press a button if there is one to press, regardless of our age.  Mr. Farris takes the job of selecting the keeper of the box very seriously, and after watching said persons for a period of time, a worthy individual is chosen.  Mr. Farris tells Gwendy that ‘she is the one’ and I believe that he sees the strength emanating from her self-motivated spirit each time she took the suicide stairs that summer.  The distribution of an individual treat when the levers are pulled by the keeper is most likely exclusive; I believe that depending on the attributes of the chosen individual, the box conforms it’s details to be most alluring to keep them coming back for more.

I found this short novella to be entertaining and quick to read, but if reading isn’t your jam, the audiobook narrator, Maggie Siff, is purportedly fantastic.  Maggie starred in the AMC drama Mad Men and Sons of Anarchy on FX.  The inner conflict and strain on the moral compass through making choices in all of us is awakened through Gwendy’s debacle of ‘to press the button or not.’  The master of horror partnered with Richard Chizmar weaves the readers’ imagination with strong characters into the fabric of yet another engaging story with Gwendy’s Button Box. I have all of the signs and symptoms of a SK constant reader, so I tend to immerse myself in any of King’s works that I can find.  I had not read anything written by Richard Chizmar before, but after finishing this story, I find myself interested in more of his works, especially Gwendy’s Magic Feather (release date of November 19, 2019) which continues the tale of Gwendy and the button box.  It seems that a majority of King’s stories are adapted or in the works of being made into miniseries events or movies; quite possibly someday we just might see Gwendy and her box on the big screen.