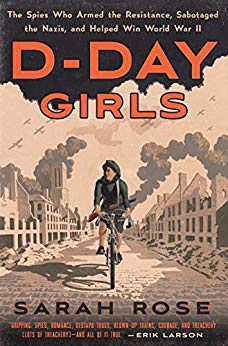 D-Day Girls by Sarah Rose is a page turning work of nonfiction that documents the adventures the women of Winston Churchill’s Special Operations Executive who risked everything to prepare France for the allied invasion on June 6, 1944. During a time when very little was expected of women outside their traditional roles, these women broke barriers and took risks for the cause of freedom. They were the first women in organized combat and the first women in active duty special forces. They trained as paratroopers and infiltrated the war zone in France. They were spies charged with subverting the German war machine with the goal of isolating Normandy from the rest of France. Because of Churchill’s special forces, the roads leading to Normandy were blocked on D-Day. The efforts of these women prevented the Germans from sending additional troops to the coast, saving thousands of Allied soldiers.

D-Day Girls is a great book for readers interested in World War II and the role that women played in the war effort.