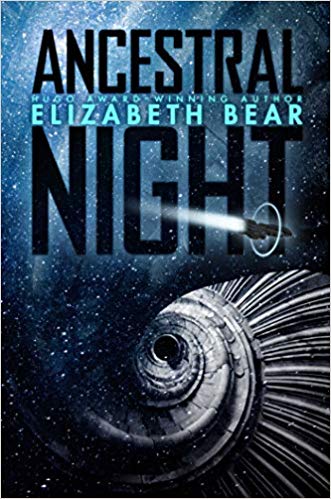 Haimey Dz works on the “tugboat” Singer, a sentient AI spaceship, along with her shipmate Connla and their two cats. What should have been another routine job towing a derelict spacecraft turns out to be something much stranger. They discover a giant artifact belonging to a long-dead race of aliens called the Koregoi. Deciding to dock with the artifact and investigate, Haimey inadvertently becomes infected with a virus. She soon realizes that the virus allows her to feel the contours of space-time and dark matter, allowing her to navigate through “white-space” in a much more efficient way than their current technology. Unfortunately, they are not the only ones who are aware of this artifact’s enormous value, and what follows is a galactic manhunt with space pirates and corrupt government officials, with the crew of the Singer as the prey.

Ancestral Night, the first entry in the White Space series, is an epic space opera that has it all: alien terrorism, space dragons, augmented humans, cats in space, and all the strange and wondrous things you would expect from this multiple Hugo award-winning author. Although this “everything but the kitchen sink” style might intimidate the casual reader, fans of hard sci-fi will find this story impossible to put down.