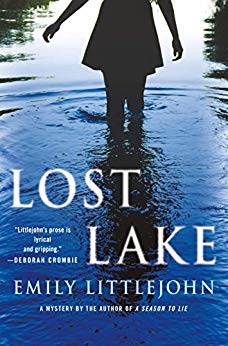 Lost Lake written by Emily Littlejohn is a fast paced thriller that is a true whodunit. Four campers decide to camp near the ominous Lost Lake; when the campers wake the next day, one of the campers has vanished. Sari Chesney had a lot going for in life, or so it seemed, so why would she vanish into thin air? Is it foul play or just someone walking away from their past? Detective Gemma Monroe is assigned to the case and as she starts to look for clues to figure out what happened to Sari, a relic at the museum Sari worked at is stolen. Then Sari’s boss, Betty Starbuck, is murdered. Is Detective Monroe looking to solve one murder or two? Are all the crimes coincidence or are they linked? The people who claim to know the victims the most find out that they knew them the least. Just as they start making a hypothesis of who may have wanted Betty Starbuck dead and Sari Chesney out of the way there is a leak to the press with valuable information regarding the case, causing a life-shattering twist. This book keeps the reader guessing up until the end what truly happened and who was involved. The ending is guaranteed not to be what the reader expects.