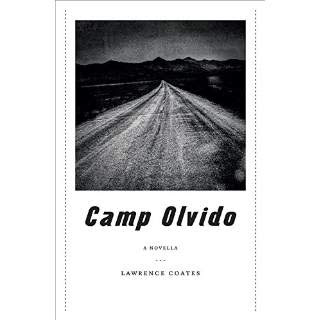 Being a working mother with 2 children, 2 jobs, and a messy chef as a partner, it is often difficult to commit the time and effort to reading larger works of fiction. I recently discovered the benefits of short stories and novellas for this very reason. They give me the satisfaction of storytelling, but on a simplified scale. The novella, Camp Olvido, certainly does just that.

A “Hispanic Heritage” read, it takes place in California in 1932, at a migrant labor camp, where a majority of its workers toil in the fields picking cotton, under the watchful eyes and strict contractual obligations of the camp’s boss and his son. We quickly meet Esteban Alas, a young man who has found a way out of the cotton-picker’s hell, by making a living selling booze and providing mobile entertainment out of the back of his vehicle. His presence in the camp is welcoming by the camp’s boss, as it boosts the men’s morale and keeps them in need of money, which keeps them from leaving the camp and stopping production. While many of the worker’s are loyal customers, we learn about their resentment toward Esteban, for he has made a career tempting them out of their money, which keeps himself out of the field, and them trapped within it.

We learn that Esteban dreams of more than the life he has built and maintained at Camp Olvido, a life which comes into jeopardy when he reluctantly helps two friends try to leave the camp before their contract is up, and the end results are tragic. Can Esteban survive the harshness of the poverty-stricken, depression-era labor camp long enough to escape it?

Lawrence Coates writes this piece in a style all his own. Blunt, to the point, and void of the details that often bog down heavier reads, his character dialogues are written with no quotations, sometimes making it difficult to determine what is being spoken and what is just a thought. Conflicted and passionate as the main character seems to be, however, the confusion might be just what the author intended.