Hamilton: the Revolution by Lin-Manuel Miranda and Jeremy McCarter 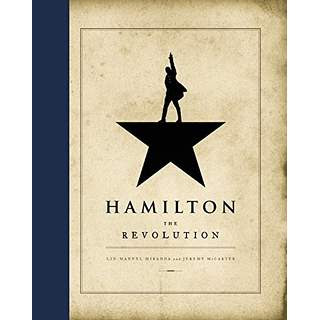 Although a hip-hop infused musical adaptation of Ron Chernow’s 800-page biography of Founding Father Alexander Hamilton probably seemed like an unlikely prospect at one time, Hamilton is now a Tony Award winner and the biggest show to hit Broadway in decades. With the box office sold out and tickets going for hundreds of dollars, this book by the show’s creative genius may be the closest any of us get to the magic for a while.

Lin-Manuel Miranda’s lyrics are printed here in their entirety, (including some tidbits that didn’t even make it onto the two-disc Broadway cast recording), alongside full-color photographs from the production. Miranda also treats us with insights into his writing process and makes sure we catch his shout-outs to everyone from Rodgers and Hammerstein to Biggie Smalls. McCarter includes more behind-the-scenes information and photos, showing us how the writer, producers, musicians, set designers, choreographers, and actors collaborated to create something special. It’s a treat for fans of the show, but also a great introduction to Hamilton for those who are just curious to see what all of the excitement is about.