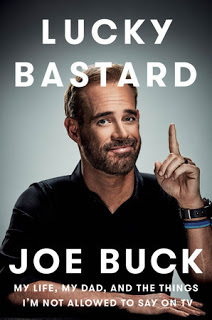 Buck, Son of legendary broadcaster Jack Buck, spins a self-deprecating tale of growing up in the shadow of his famous father. From an early age, Joe was allowed to tag along and watch his dad do the play-by-play for the St. Louis Cardinals baseball team.

Brutally honest about his own and his father’s shortcomings, Buck tells how it was growing up with the most famous father in St. Louis, who never turned down a speaking engagement or a request for an autograph. As he begins to blossom in his own broadcasting career, Joe faces stinging criticism and accusations of favoritism from the baseball community.

Lucky Bastard is a quick read filled with an inside look at the famous; from Mark McGuire’s steroid fueled home run chase, to personal anecdotes about Derek Jeter, Ken Griffey Jr, and broadcasting partner Tim McCarver. A light, entertaining glance behind the scenes from one of our top broadcasters.