Music of the Ghosts by Vaddey Ratner 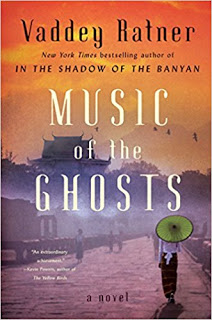 2003: Nearly twenty-five years after escaping the Khmer Rouge as a child, Suteera Aung has returned to Cambodia.

Officially, Teera is there to fulfill the dying wish of the only other member of her extended family to survive the genocide – but she is also responding to a letter she has received from a stranger.

The nameless “Old Musician” who lives at the temple where Teera’s relative is to be memorialized claims to have known her father and been with him in the prison camp where he died. The family had never known what happened to Teera’s father; like many during the war, he simply disappeared. Although she knows she needs to find out the truth about his death, the news is bound to be painful.

As the Old Musician struggles with guilt over his own small part in the war, Teera finds solace in other survivors. She begins to build a new family and a future for herself in a country she had never thought to see again. This beautiful, but haunting, story is about people finding hope amidst ruins.