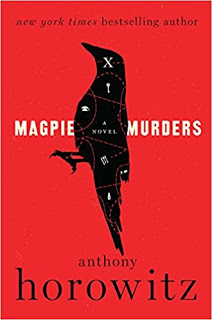 Mystery author Alan Conway may be horrible to work with, but his bestselling series featuring Detective Atticus Pünd is keeping Susan Ryeland’s publishing company in business. Ryeland is Conway’s book editor and when she receives his latest manuscript, about two murders in a quiet 1950s English village, we read it along with her. We are just as frustrated as she is when the manuscript of the novel-within-the-novel cuts off just as Pünd is set to unmask the killer. Conway’s final chapter is missing.

To make things worse, the author has apparently just committed suicide and no one seems to know where the missing pages could be or how he intended the story to end. Ryeland turns amateur sleuth to uncover his secrets, but the more she looks into things, the more convinced she becomes that Conway himself was murdered. Does his missing chapter expose something his killer needed to stay hidden?

Fans of Agatha Christie and other classic murder mystery writers will love how this novel plays with the genre. The modern-day plot intertwines with the mid-Century detective story in a satisfying and clever way.