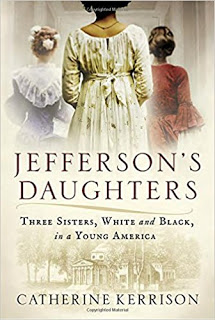 Thomas Jefferson, author of the Declaration of Independence, had three daughters who lived to adulthood: two by his wife, and a third who was born to an enslaved woman. Each of them found her own way to assert her individuality during her lifetime and historian Catherine Kerrison does an excellent job of bringing all three women out of the shadows of their famous father in this work.

Jefferson’s elder daughters were brought up to secure good marriages, which he saw as the end-all of a woman’s education. Although Martha and Maria lived largely conventional lives, they definitely had their own opinions, which led to some clashes with their father when those ideas didn’t match his.

In contrast, Harriet Hemings, born into slavery, had to openly stake her claim to freedom. Although Jefferson never acknowledged paternity of her, she was allowed some privileges at Monticello – including being allowed to “walk” away from the plantation after she turned twenty-one. Although Harriet disappears from historical record at that moment, family legend says she moved to Washington, D.C., passed as a white woman, and became the matriarch of a prominent family. If that is true, her safety at the time would have depended on her ability to break ties with her old life. Perhaps the most interesting section of the book is where Kerrison sifts through vital records in an attempt to bring Harriet back into history.